Why Did We Use Terragrunt in a Complex Multi-Account AWS Architecture?

Why Did We Use Terragrunt in a Complex Multi-Account AWS Architecture?

One of our customers reached us to design a cloud-native infrastructure for one of their projects. Since this was a government project, there were many security considerations and strict network requirements, but as Kloia, we always find a way to make the process efficient.

First, we started by planning the infrastructure. Even though the application was a non-cloud compliant java application, customers wanted to run it on Kubernetes to make it future-ready. In order to be compliant with government regulations and make it secure, we decided to split infrastructure across five accounts. AWS recommends account separation based on account functionality. For example, this separation will isolate production workloads from development and test workloads. This separation made this infrastructure more complex. You will see the account details in the “Account Configurations” section.

Also, in this post, you will see how we benefited from Terragrunt to follow IaC methodology with Terraform much easier.

As Kloia, we always prefer to follow Infrastructure as Code methodology. Terraform helped us to develop the necessary modules. We found it hard to manage this complex infrastructure with plain Terraform DSL based on our previous experiences. One of the main problems we encountered before was repeating the same code in different modules repeatedly. Because on different accounts, we had to deploy the same resources more than once with tiny differences.

We used Terragrunt to solve this issue. Terragrunt is a thin wrapper that provides extra tools for keeping your configurations DRY, working with multiple Terraform modules, and managing remote state. DRY means don’t repeat yourself. That helped a lot with self-repeating modules we had to use in this architecture.

Terragrunt allows you to do the following items with ease:

Of course, there are more features and use cases for Terragrunt, but these were the key ones that moved us to use Terragrunt. 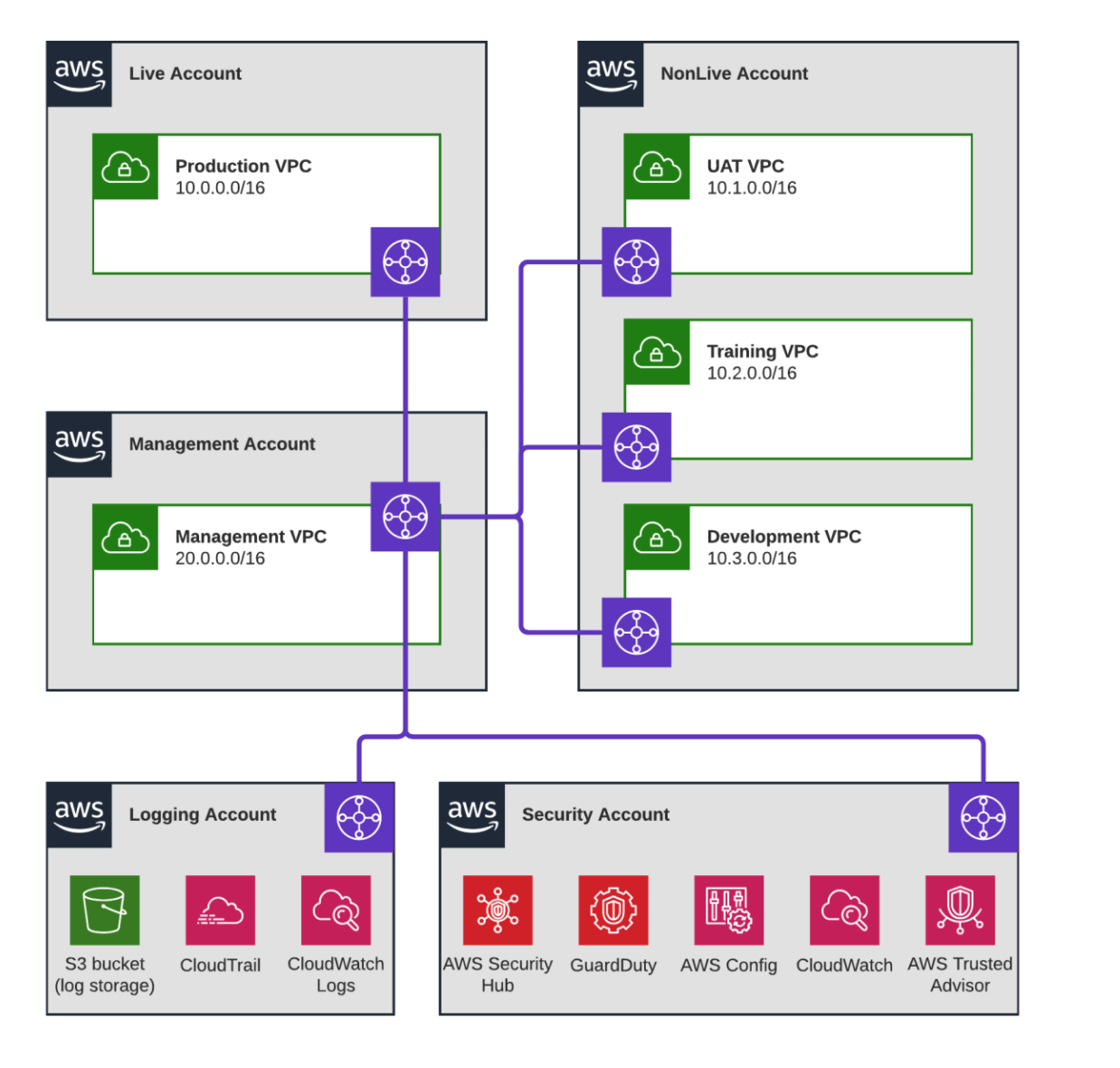 Every applicable AWS resource was encrypted using the customer's own KMS Key generated using Cloud HSM. AWS CloudHSM is a cloud-based hardware security module (HSM) that enables you to easily generate and use your encryption keys on the AWS Cloud.

The Management Account connected the networks of all accounts with Transit Gateway. AWS Transit Gateway is a service that enables customers to connect their Amazon Virtual Private Clouds (VPCs) and their on-premises networks to a single gateway. As you grow the number of workloads running on AWS, you need to scale your networks across multiple accounts and Amazon VPCs to keep up with the growth. This process enabled us to encrypt the network automatically between accounts. The network is strictly prohibited from using Network ACLs.

We decided to use Nginx Ingress Controller to expose containers to the internet. All internal pod-to-pod  ( east-west ) communications encrypted with AWS App Mesh. AWS App Mesh is a service mesh that makes it easy to monitor and control services. App Mesh standardizes how your services communicate, giving you end-to-end visibility and ensuring your applications' high availability.

For scanning S3 Buckets, we used Amazon Macie. It is a fully managed data security and data privacy service that uses machine learning and pattern matching to discover and protect your sensitive data in AWS.

We preferred Fluentbit for shipping container logs to their respective Cloudwatch log groups in the Log account. All IAM permissions were handled by using IAM roles Service Accounts for EKS clusters.

To provide monitoring for all Kubernetes Clusters, we installed Prometheus and Grafana in all clusters. 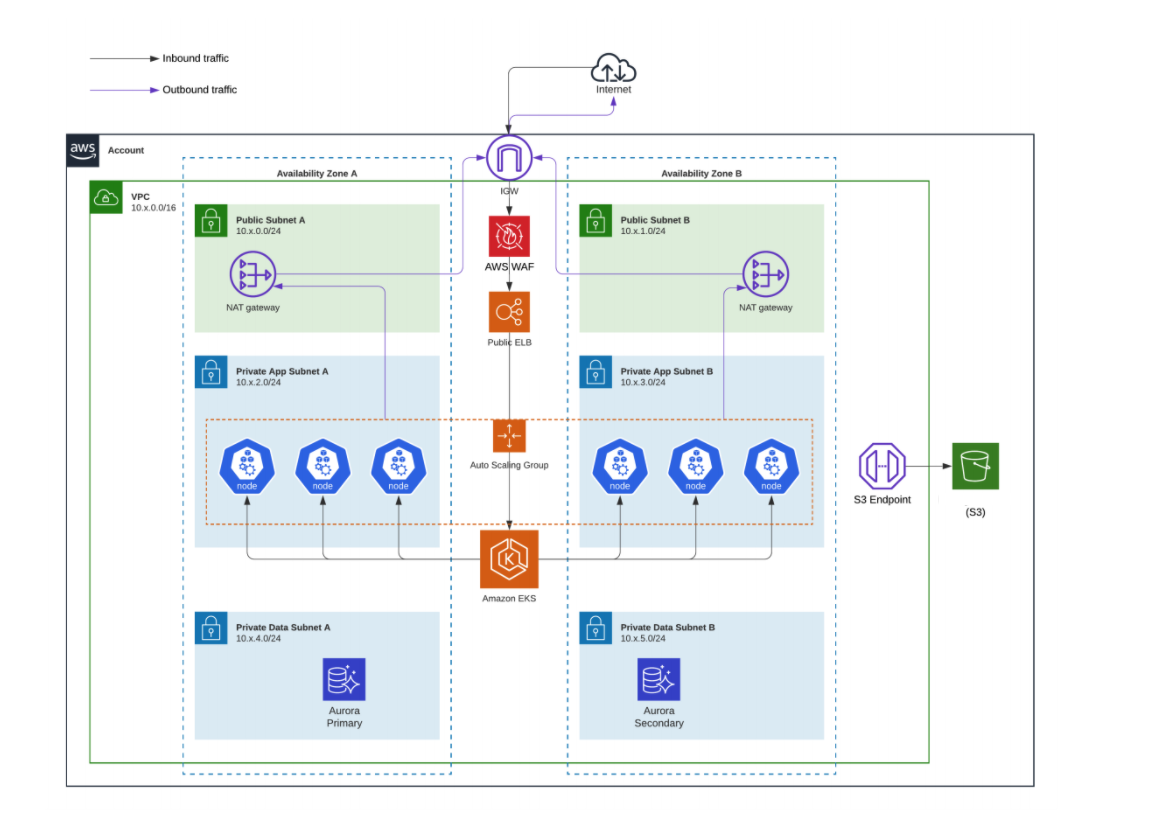 To create the whole infrastructure, we developed the following modules with Terraform to deploy to the accounts:

k8s prefixed modules are EKS components installed in the cluster.

Terragrunt can define your modules or whole stack and then deploy your stack to different environments with ease. Below is the complete folder structure for the Terragrunt repository: 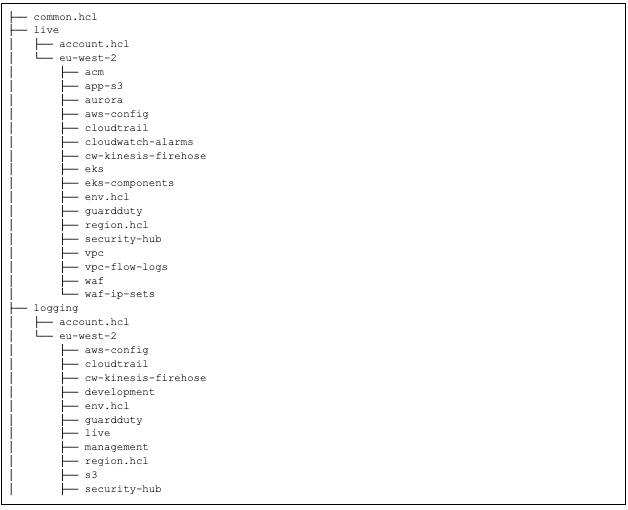 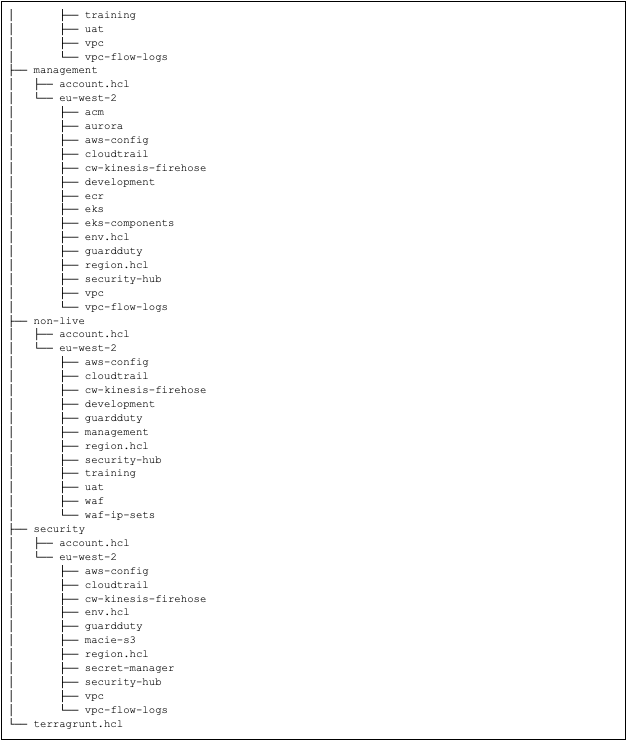 As you can see from the folder structure, most of these services are configured in every account with tiny differences. For example, AWS Config, Amazon GuardDuty, AWS CloudTrail are present in every account in this environment. Without Terragrunt, we would have to manually configure each of the services separately and run terraform apply manually on each account’s subfolder.

You would typically add your provider configuration in each module’s .tf files. Still, with Terragrunt, you can configure this information on the root level once and reference these in your module’s .hcl file easily, like the example below.

If you have dependencies between your modules, for example, if some resources need to wait for the VPC module’s completion, you would typically add a data block to your .tf file. Still, with Terragrunt, you can just reference it like the example below.

If someone wants to deploy every component to every account, they just need to run a terragrunt apply command and watch the environment creation. For example, if only the logging account needs to be deployed, they need to change the directory to the logging and apply Terragrunt there;

This results in an easily defined and self-documented infrastructure repository.

This blog post shows how we can follow Infrastructure as Code methodology with Terragrunt and how Terragrunt works.

We have benefited from Terragrunt because it saved us a lot of time and effort. At the same time, it made our code much simpler and more readable.

If you have more than one environment and spend a lot of time writing too many .tf files with nearly the same configurations, you should check out Terragrunt.

working at kloia as a Cloud and DevOps Consultant. Trying to help everyone with their adoption to DevOps culture, methods, and Cloud journey.