AWS has developed and published an Open Source Cluster Autoscaling tool called Karpenter and released the GA version at re:Invent 2021. Right now, Karpenter only supports AWS as the underlying Cloud Provider but I believe this will extend in the future with contributions from the community. 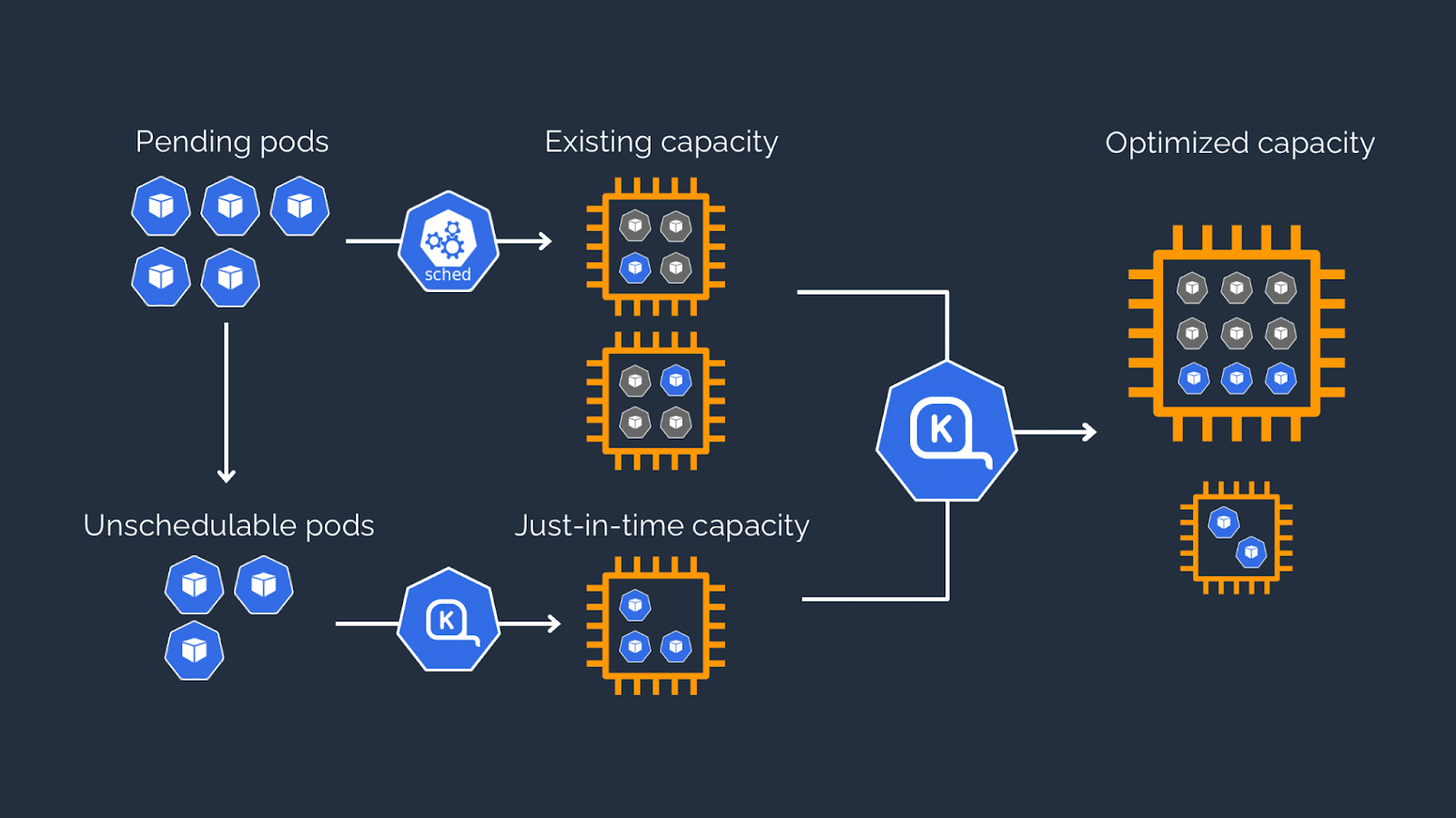 Karpenter watches the events in the Kubernetes cluster and resource requests for workloads. After detecting unschedulable pods Karpenter makes the decisions about creating and terminating the nodes. It doesn’t use Node Groups, instead it uses Launch Templates for nodes and you can configure custom Launch Templates for your needs.

With Karpenter, as operators we only need to configure Provisioner CRDs. We can configure Provider options, Annotations, Taints and most importantly TTL second values for node termination. With the TTL options Karpenter cordons the nodes, drains all the pods and finally safely deletes the node. We can also add multiple provisioners with different configurations to a single cluster and separate our workloads within these provisioners.

So, the question is how Karpenter differentiates from Cluster Autoscaler. Mostly these two tools are doing the same thing, that is managing nodes in your cluster on your behalf. But there are three main differences between the two. Let me explain those.

I’ve prepared a GitHub repository for this demonstration. You can follow the instructions in this blog post and codes from the repository to try Karpenter. In the repo, there are some Terraform codes to deploy an EKS cluster, necessary IAM Roles for Karpenter and of course Karpenter Controller itself. Also, there are some yaml files for example Provisioner and application deployments as well.

I only have one Node Group in the cluster and one Node inside the Node Group. I’ll only use this Node for Karpenter resources.

As you can see from the screenshot, the Karpenter Helm chart creates a Namespace, two Deployments, and some Configmaps. The

By the way, I’m using an alias for kubectl as k .

Next, I am going to create Provisioners for different Node Types. Provisioner resources are just CRDs and easily configurable as Kubernetes yaml definition files. You can find the examples in the GitHub repository as well.

First one is for AMD64 type architecture. 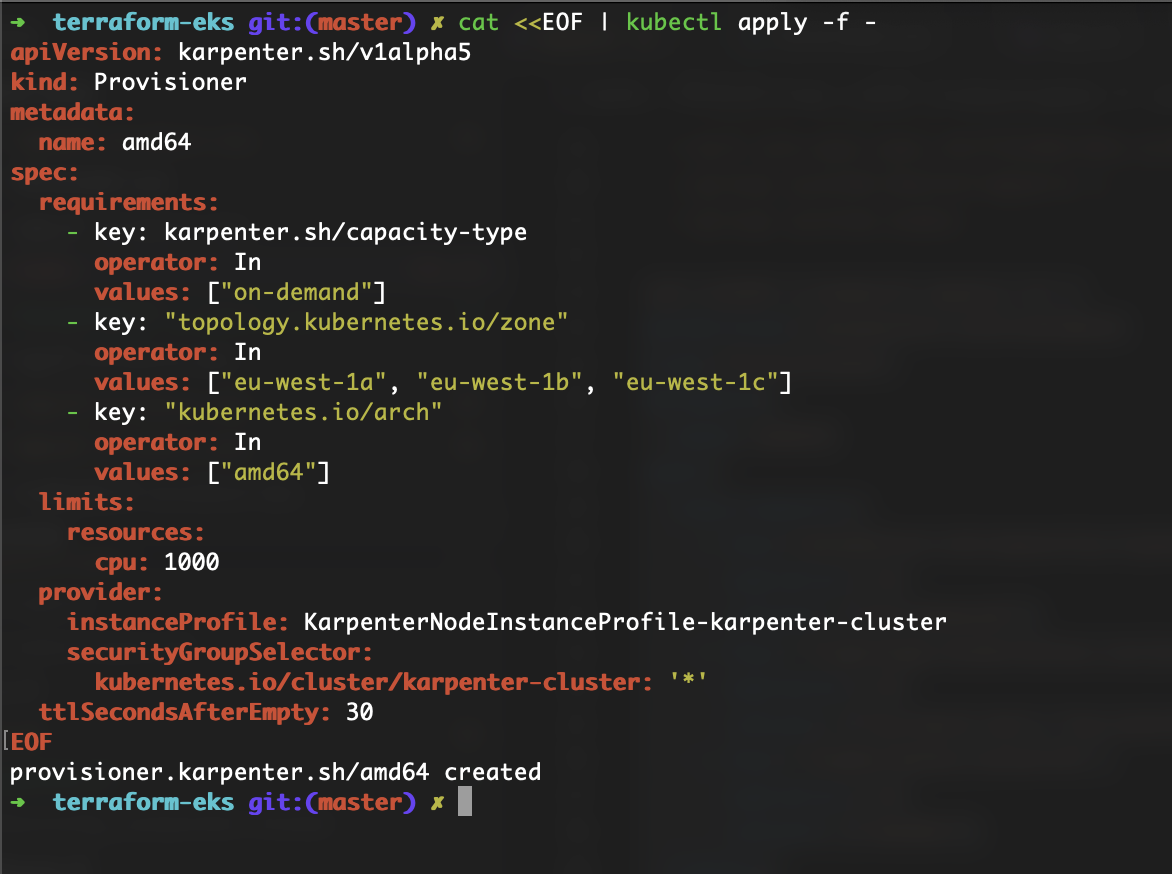 As you can see, in the spec.Requirements section I’ve defined three parameters. First one is purchasing options, the second one is for AWS Availability Zones and the final one is for Node Architecture. I’ve also added the Instance Profile to the nodes that Karpenter will create. I haven’t added any instance types for this provisioner but you can add them to the requirements section if you want specific instance types for your workloads. With this configuration, Karpenter will choose the right instance type and size for my application. 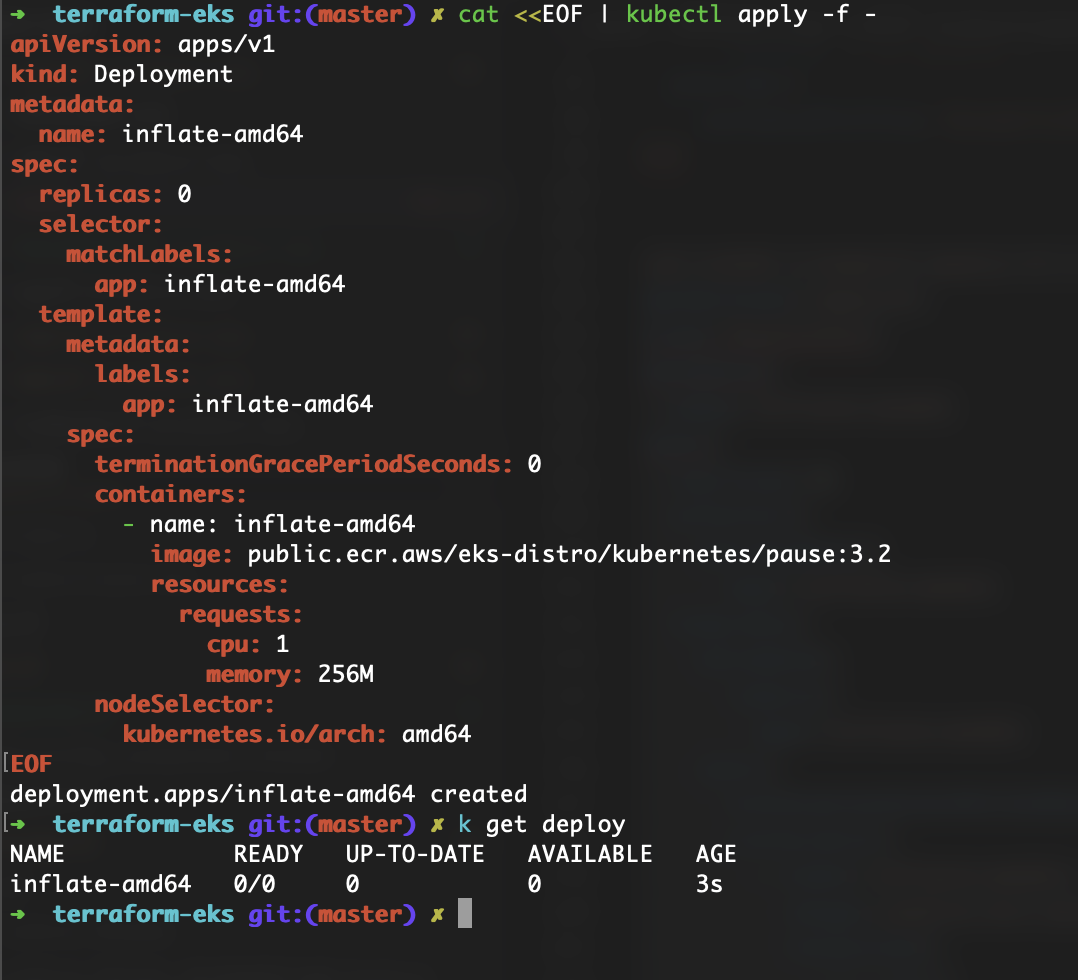 In the screenshot above, you can see I’ve added a nodeSelector that has the necessary parameter to match the amd64 Provisioner.

Now, let’s scale the deployment and see what happens.

It’s time to see the logs of the Karpenter Controller. I use the

command for this. Here is the output. 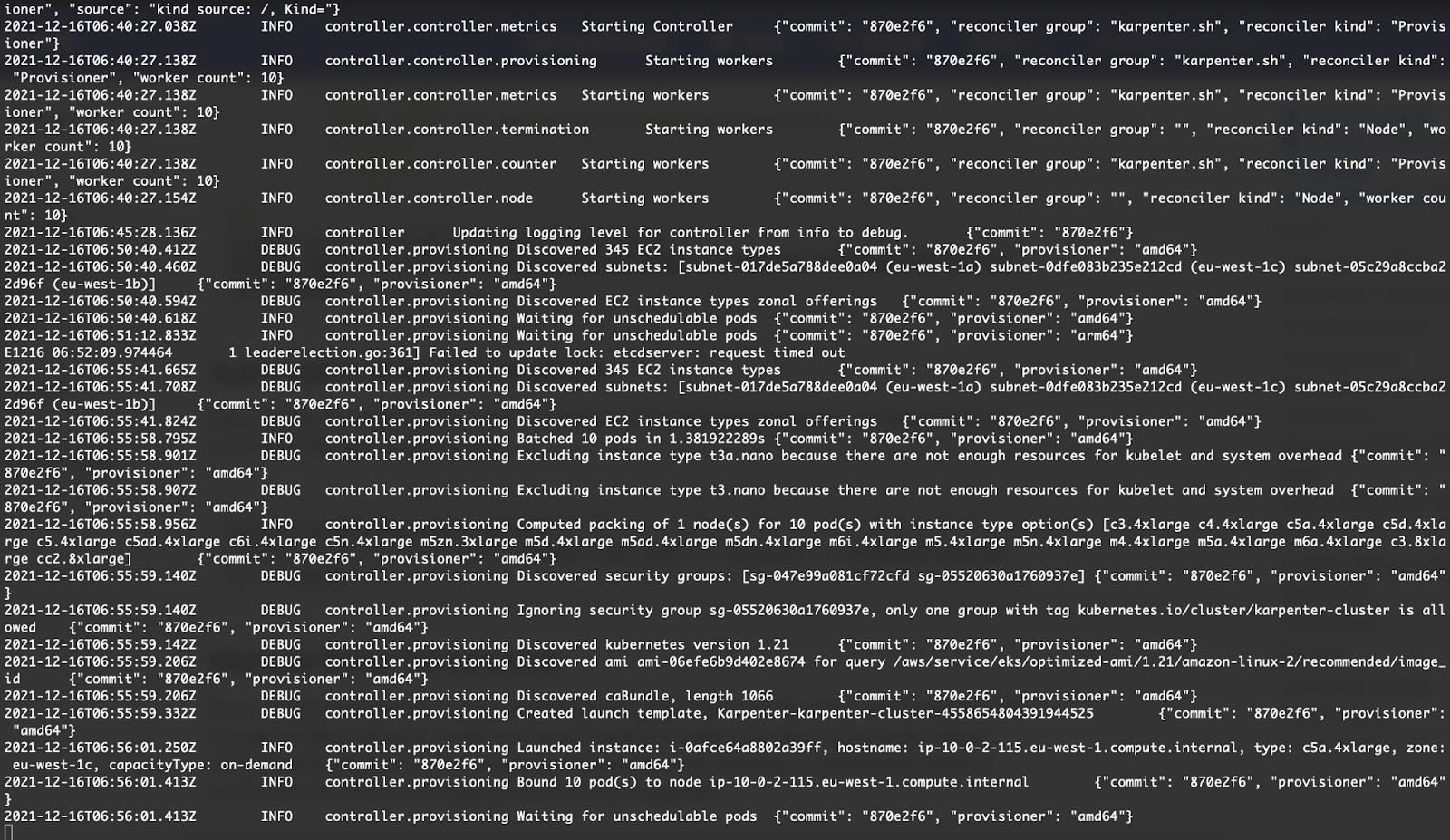 Let me explain what is happening in this output. First, Karpenter detects there are some unschedulable pods in the cluster and triggers the node provisioning action. It reads some information from AWS like EC2 Instance types with amd64 architecture in the specified region, subnets, and security groups with the tag kubernetes.io/cluster/karpenter-cluster.

Next, Karpenter excludes some instance types because it detects that my workload will not fit into those instances. It decides to launch 1 instance for 10 pods from the listed instance type options. That means I won’t under-provision or over-provision anything in my AWS account. That's one of the golden rules in Cost Optimization when using Public Cloud Providers and Karpenter does it for me. Then Karpenter creates a Launch Template for the right instance and launches it.

Perfect! Now I’m moving on to another Provisioner. 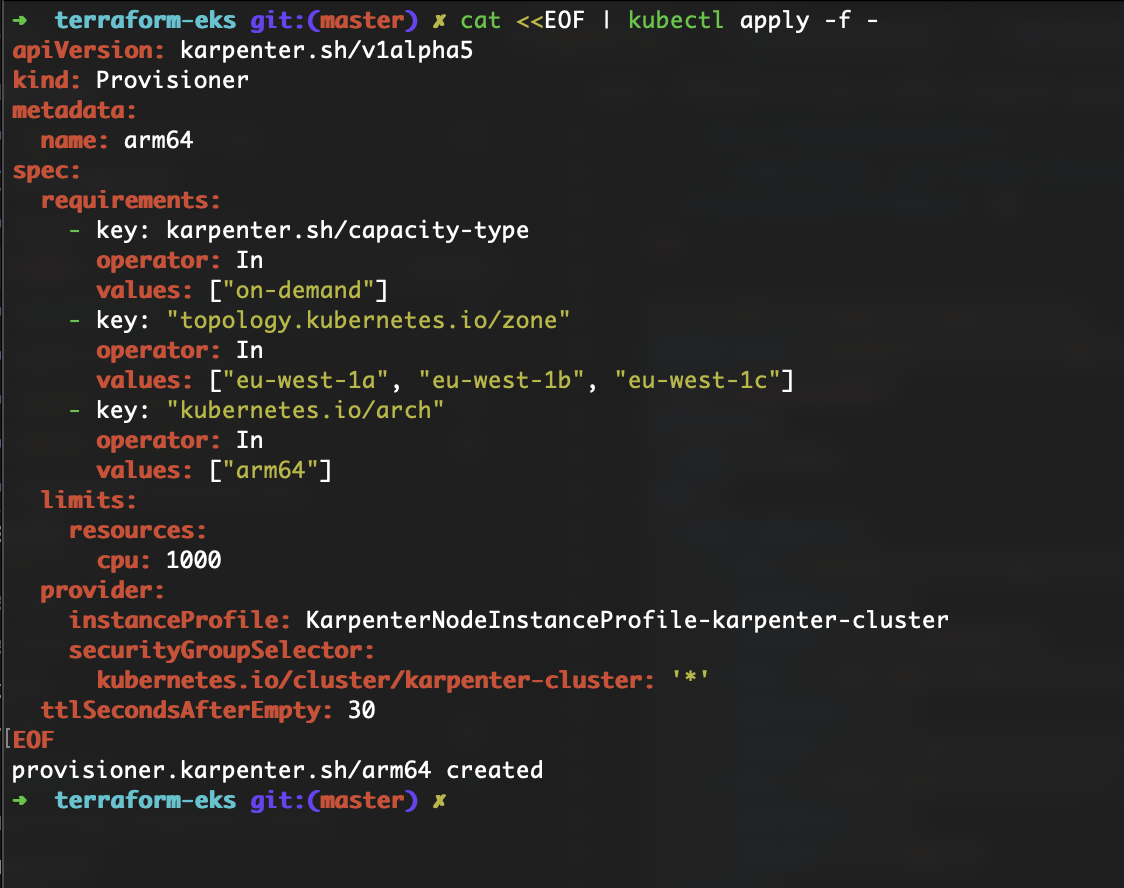 This time I’ve created a Provisioner for arm64 architecture. Let me deploy a new application for this provisioner. 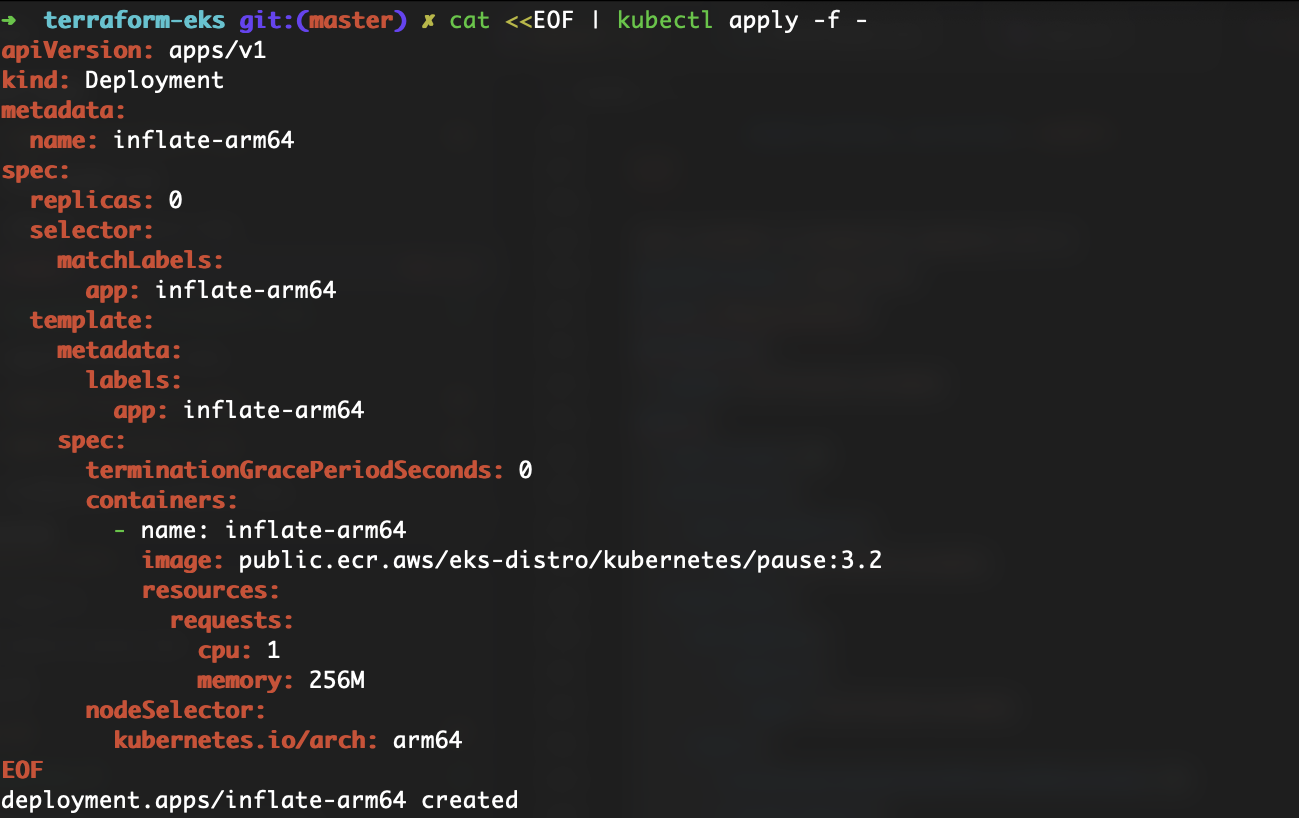 I’m going to scale this application from 0 to 10.

Starting from line 3, Karpenter detects the scaling of the application and starts provisioning a node with ARM processor. It again excludes the tiny instance types, creates another Launch Template for this node, launches the instance, and schedules the pods into that node.

Again, I didn’t have to configure anything prior to deploying the application except creating the Provisioner.

Like I’ve mentioned before, Karpenter can also provision Spot instances. I’m going to follow the same procedures as before. Create a Provisioner for Spot instances, Deploy an application with the right Node Selector configuration, and scale the deployment from 0 to 5. 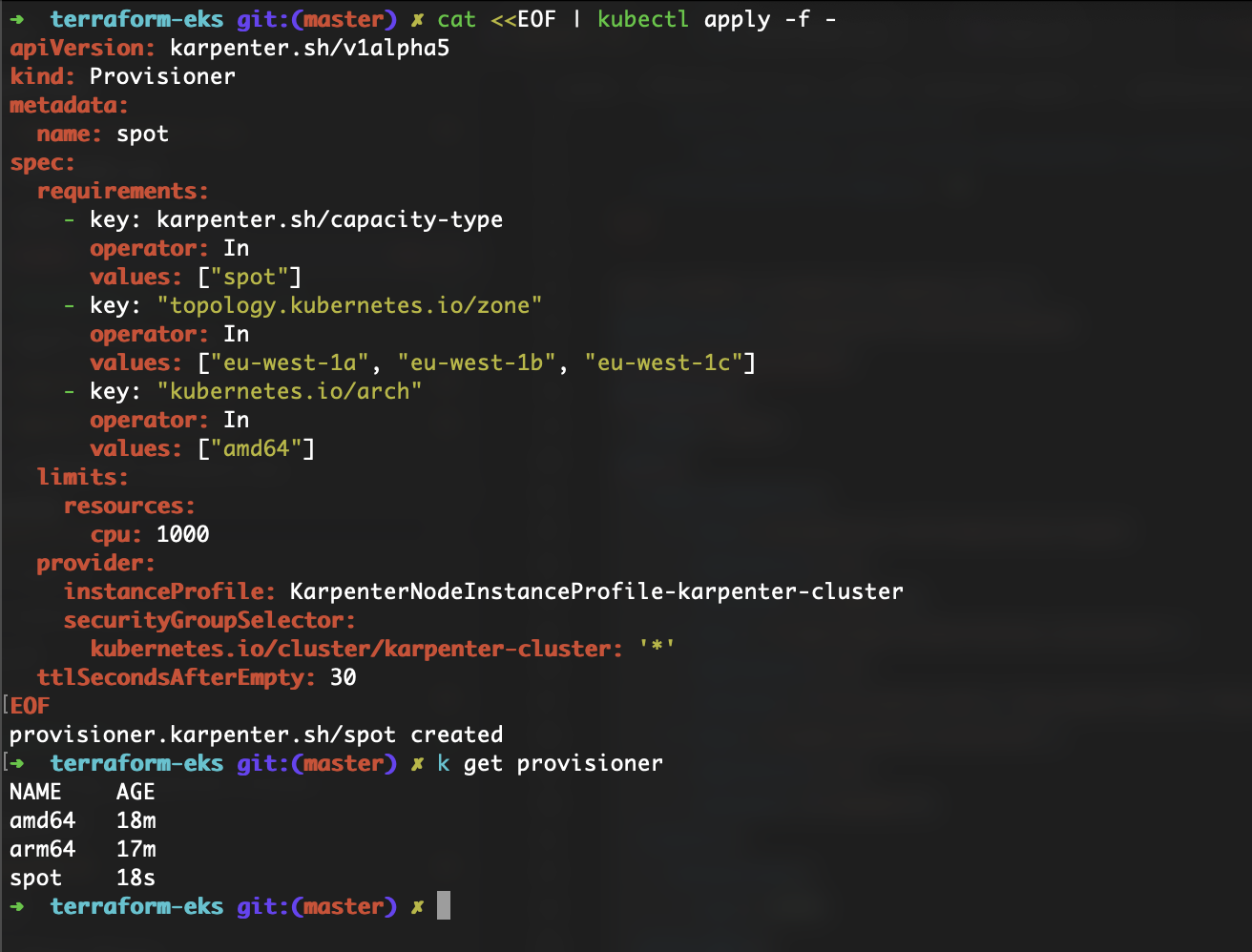 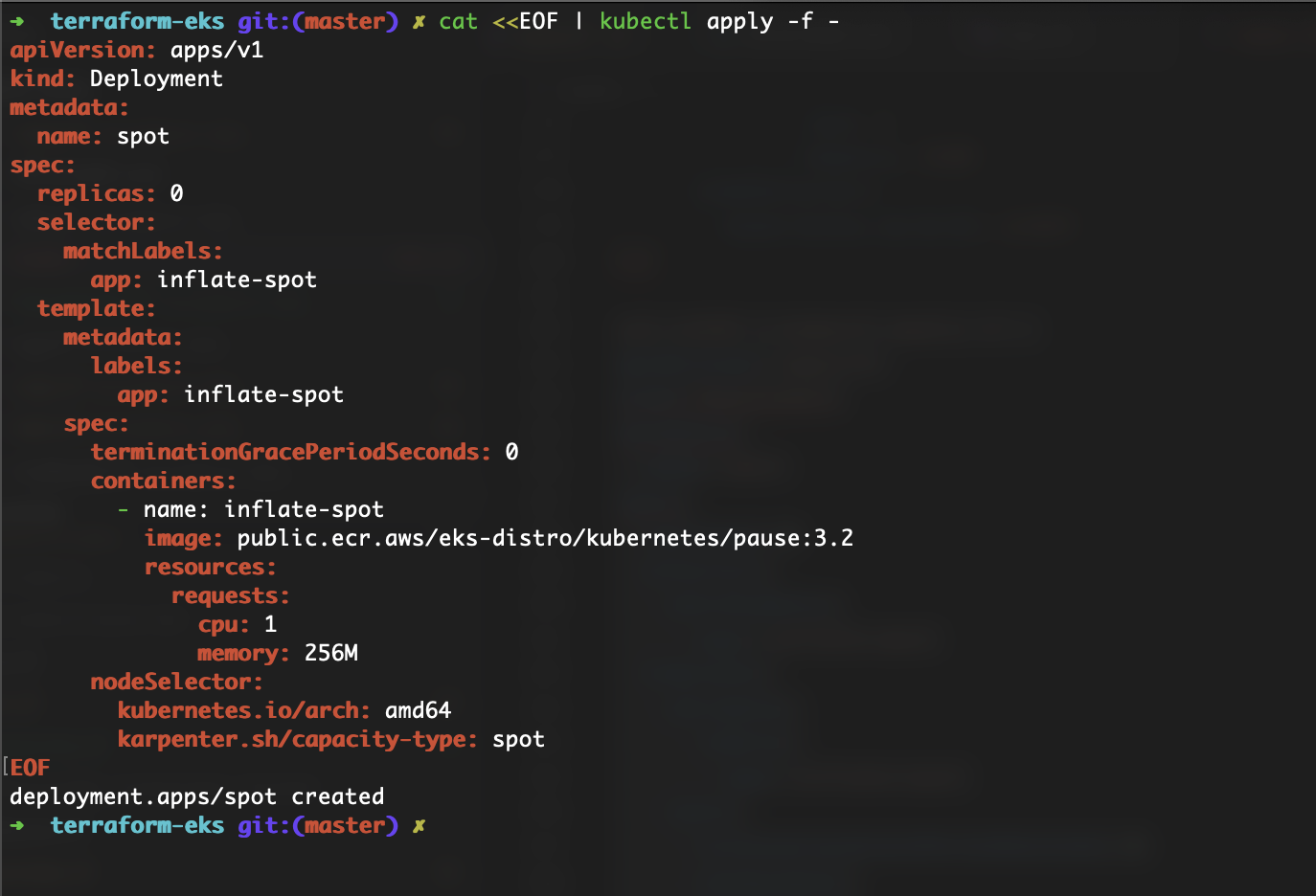 As you can see, Karpenter does its job and launches the Spot instance.

You can see the node architecture details and instance type details with this command: 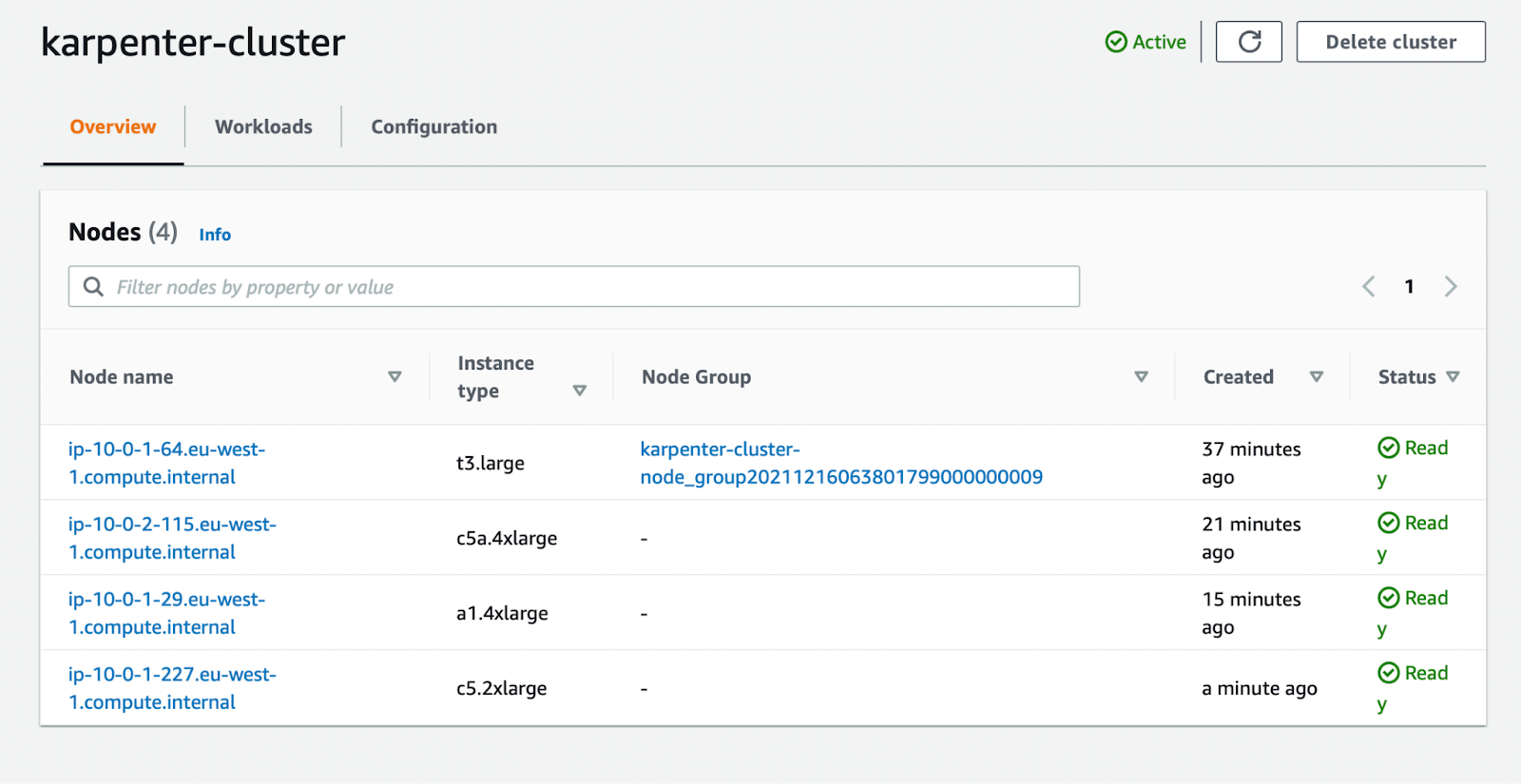 When I look at the instance details, I can see that the last created node is actually a Spot instance.

Finally, let me delete the deployments and see how Karpenter handles that. As you’ve already seen, my Provisioner configurations have the ttlSecondsAfterEmpty

parameter set to 30. With this configuration parameter, Karpenter adds the TTL (Time to Live) to nodes, Drain the nodes, and after TTL period safely removes the nodes. When I run the k get nodes command, I can see the nodes are in Scheduling Disabled status.

The process can be seen from the logs output screenshot above.

The Karpenter project is in the early stages right now. But if you are running your Kubernetes clusters on AWS and tired of configuring different Node Groups for every workload that needs something different or managing the configuration of Cluster Autoscaler, you can give Karpenter a try. It is simple, efficient and promising.

working at kloia as a Cloud and DevOps Consultant. Trying to help everyone with their adoption to DevOps culture, methods, and Cloud journey.